I’ve been in a lot of conversations about orthodoxy. The word itself is a turn-off to some, and a status for others. The former believe the word to be a mere intellectual pursuit detached from holistic love, while the latter like to use it as a seal of approval. But orthodoxy is neither a cold truth nor a rank in prestige. Orthodoxy is about how we communicate God’s revealed truth.

Many think it’s an old guy term, and I would agree. That is part of its appeal. Orthodoxy is concerned with what the true church has historically affirmed and denied about the first principles of God and salvation revealed in his word. God didn’t just give us his word; he made us a church. The divine authority of his word leads to churchly confession. We aren’t just concerned about what God’s word says; we pursue the understanding of what it says.

Orthodoxy is an act of love. Loving truth leads to communicating truth with the goal of living in unity in the truth. Ultimately, orthodoxy serves our goal of communion with the triune God, or should I say, his pursuit of communion with us. What a great wonder it is that God has revealed himself to his people! And he does give us a status, union with Christ as new creations, so that we have fellowship with the Father, through the Son, in the Spirit. 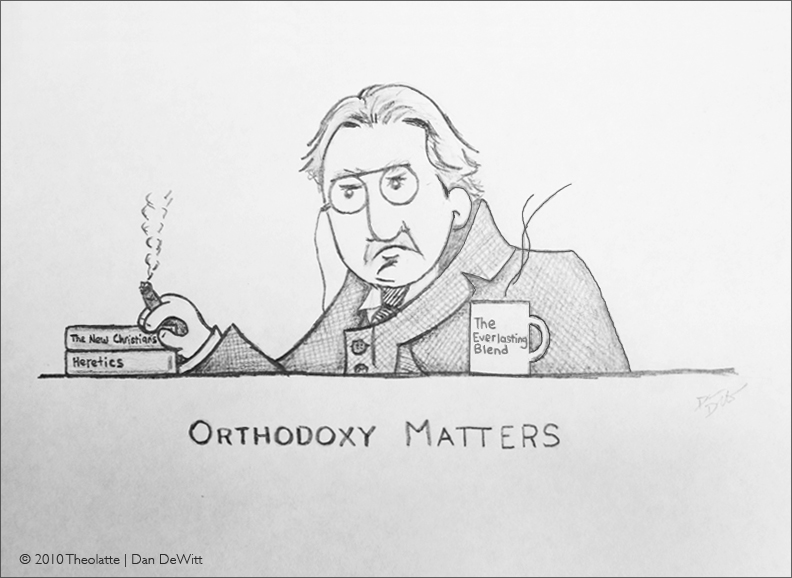 Reading and interpreting Scripture is not an individual act. It is a covenantal act. And it is an act that requires the Spirit’s work in his people. While upholding the necessity of personal faith in Christ to have a saving relationship with God, we also embrace the Scriptures as God’s living self-revelation to his people. So we care about orthodoxy because how we communicate matters.

Herman Bavinck beautifully explains to us the riches of God’s revelation:

We must avoid the one-sidedness of intellectualism and that of mysticism, for they are both a denial of the riches of revelation. Since both head and heart, the whole person in being and consciousness, must be renewed, revelation in this dispensation is continued jointly in Scripture and in the church. In this context, the two are most intimately connected. Scripture is the light of the church, and the church the life of Scripture. Apart from the church, Scripture is an enigma and an offense. Without rebirth no one can know it. Those who do not participate in its life cannot understand its meaning and its point of view.

Conversely, the life of the church is a complete mystery unless Scripture sheds its life upon it. Scripture explains the church; the church understands Scripture. In the church Scripture confirms and seals its revelation, and in Scripture the Christian—and the church—learn to understand themselves in relation to God and the world, in their past, present, and future.

Scripture, accordingly, does not stand by itself. It may not be construed deistically. It is rooted in a centuries-long history and is the fruit of God’s revelation among the people of Israel and in Christ. Still, it is not a book of times long past, which only links us with persons and events of the past. Holy Scripture is not an arid story or ancient chronicle but the ever-living,eternally youthful Word, which God, now and always, issues to his people. It is the eternally ongoing speech of God to us. It does not just serve to give us historical information; it does not even have the intent to furnish us a historical story by the standard of reliability demanded in other realms of knowledge. Holy Scripture is tendentious; whatever was written in former days was written for our instruction, that by steadfastness and by encouragement of the Scriptures we may have hope [Rom. 15:4].

Scripture was written by the Holy Spirit that it might serve him in guiding the church, in the perfecting of the saints, in the building up of the body of Christ. In it God daily comes to his people. In it he speaks to his people, not from afar, but from nearby. In it he reveals himself, from day to day, to believers in the fullness of his truth and grace. Through it he works his miracles of compassion and faithfulness.

Scripture is the ongoing rapport between heaven and earth, between Christ and his church, between God and his children. It does not just tie us to the past; it binds us to the living Lord in the heavens. It is the living voice of God, the letter of the omnipotent God to his creature. God once created the world by the word, and by that word he also upholds it [Heb. 1:2,3]; but he also re-creates it by the word and prepares it to be his dwelling. Divine inspiration, accordingly, is a permanent attribute of Holy Scripture. It was not only “God-breathed” at the time it was written; it is “God-breathing.” “It was divinely inspired, not merely while it was written, God breathing through the writers; but also, whilst it is being read, God breathing through the Scripture, and the Scripture breathing Him [He being their very breath].” Having come forth from revelation, it is kept alive by divine inspiration and made efficacious. It is the Holy Spirit who maintains both prophecy and miracle, Scripture and church, joining them together, thus preparing the parousia.

Some day when being and consciousness are completely renewed, revelation will end and Scripture will no longer be necessary. Divine inspiration will then be the portion of all God’s children. They will all be taught by the Lord and serve him in his temple. Prophecy and miracle have then become “nature,” for God dwells among his people.

(Excerpt from Bavinck, Reformed Dogmatics, Vol. 1, 384-385, boldfaces mine and I also broke the paragraphs up more for the medium of a blog post. His quotation is from J.A. Bengel, Gnomon of the New Testament, Vol. 4, 319.)